"Don't make me come back there." Maryland Gov. Larry Hogan finally pulled the car over and went back there, making the executive decision to close all Maryland public schools for two weeks beginning Monday, March 16, 2020, as Montgomery County Public Schools leaders continued to drag their feet amidst growing panic over the coronavirus. Ultimately, Hogan had to act, as school officials who see their system as its own government body and social services agency were frozen by political concerns.

"How do we indoctrinate kids ideologically, if they're at home?! How do we ever have a snow day again, once it's proven we can teleteach kids over the computer at home? What if, after two weeks or two months of no school, taxpayers realize we aren't actually doing all that much with the multi-billions of dollars MoCo taxpayers are forced to fork over to us annually?"

Those and other political questions will now actually be contemplated and answered by residents over the next two weeks. But residents, a majority of whom don't even have kids in MCPS, have other pressing matters on their mind. Child care and paper goods were chief among them Thursday. 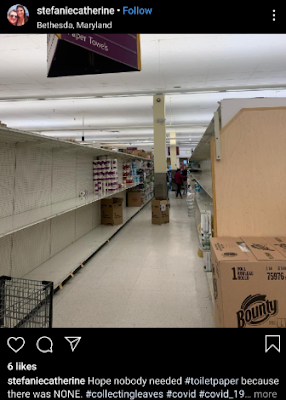 Hoarding hordes gave the county's empty paper goods aisle another ransacking for good measure Thursday evening. Perhaps there were invisible rolls that the rest of us had missed. Even Walmart's online toilet paper supply ran out as America faces a pandemic with no end in sight, and a potential total collapse of a national economy that was booming for many just a couple of weeks ago.

Hogan on Thursday banned gatherings of more than 250 people, even as event cancellations flooded the news and email boxes. He deployed the National Guard. The Republican governor also announced the first case of community transition of the covid-19 virus in Maryland. 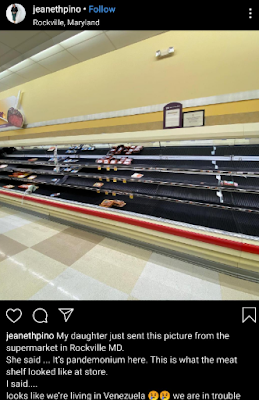 As the nation inched closer to martial law and a total lockdown similar to Italy, local businesses began to take to social media to make clear they were still open, and taking proactive steps to protect customers and employees from the virus. Brickside Food & Drink in Bethesda announced it would temporarily suspend lunch service beginning March 18, and now open at 3:00 PM on weekdays, while stepping up its cleaning regimen to regularly disinfect surfaces. The restaurant said it would continue to maintain its regular nighttime and weekend brunch hours, still opening at 11:00 AM on Saturdays and Sundays.

Brickside is even revising its menu, and emphasizing its home delivery options, the latter a recurring theme among many restaurant social media posts yesterday. "We promise not to hug you, but we'll be thrilled to see you," Chef Geoff Tracy joked in an otherwise-serious post from his Chevy Chase restaurant Lia's that emphasized the heavy impact a drop in customers would have on his employees. He, too, emphasized the option of DoorDash delivery. Owen's Ordinary at Pike & Rose said something a lot of diners would like to hear more of - that they will be sending home any staff member who is showing symptoms of illness.

Small, independent coffee shops took a cue from Starbucks and banned the practice of allowing customers to bring their old cups in to be used for a fresh drink. Clove & Cedar Coffeebar on St. Elmo Avenue in Bethesda said they would temporarily halt the practice as Starbucks has, while continuing to use compostable paper goods. Saints Row in Rockville announced they would suspend filling growlers brought in by patrons, and more frequently disinfect the brewery's public areas. Silver Spring's Astro Lab Brewing said late Thursday night that they were ramping up canning operations in case they need to switch to offering to-go options only. 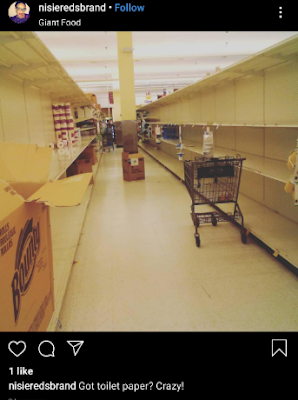 With all major movie releases being postponed, schools and universities shutting their doors, and the entire sports world shutting down indefinitely, America is a nation about to go into hibernation. It's unclear what the magic number of "two weeks" means in the real world. Unless the virus proves to be seasonal, retreating until the fall or winter, there's no end in sight for coronavirus.
Posted by Robert Dyer at 8:00 AM