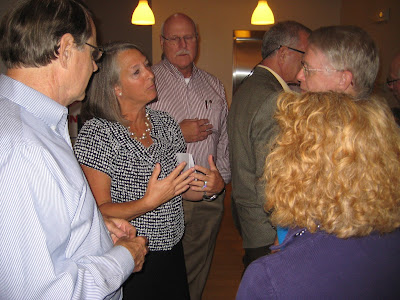 Coyle said he is "confident that under Bridget's continued leadership, we can meet the city's growing needs. This is the time to elect a proven leader, and that proven leader is Bridget."

"There was a lot of political gamesmanship in this last term," Giammo said. "Through all of that, Bridget stayed focused on what mattered." It was during Giammo's time in office that the Mayor and Council passed an Adequate Public Facilities Ordinance that was far stronger than Montgomery County's. The school capacity standards under the APFO were severely weakened by a 3-2 Council vote earlier this year, an action that Newton strongly disagreed with.

In her speech last night, Newton said the APFO school standards were "gutted on June 1" in a "back room political deal that was made." The vote by outgoing Councilmember Tom Moore and current Team Rockville election slate Councilmembers Virginia Onley and Julie Palakovich Carr "eviscerated the only tool we had in our toolbox," Newton said.

With the entire city now free of any development moratorium, but classrooms still as crowded as before, Newton predicted a "Katie bar the door" wave of development ahead. "It's going to be unbelievable."

In that context, Newton argued it will be essential to ensure that Richard Montgomery Elementary School No. 5 is built to full capacity. She also called for the hiring of more city police officers, noting that the ratio of officers-to-residents is far lower than in comparably-tiny Easton, MD, which has only 16,000 residents.
But Newton also decried the current political atmosphere in Rockville.

She fired back at Team Rockville's assertion that she failed to generate consensus on issues, noting that she was able to make allies on the Council despite being the only member not part of the 2013 Team Rockville slate. One of those allies, Councilmember Beryl Feinberg, was in attendance at last night's event.

Newton also disputed Team Rockville's bleak assessment of Rockville Town Center. "Rockville is doing very well," she said, noting that several restaurants and bars will be opening soon at Rockville Town Square, and that the Duball development across the street has attracted several tenants, including World of Beer and Panera Bread. A groundbreaking will be held at the Kettler development across Beall Avenue from Rockville Town Square in a few weeks, as well. The new Cambria Suites hotel "is booked solid almost every weekend," Newton reported.
On the personal side, Newton said she has "a strong distaste for the politics of today. I strongly, strongly object to the way the conversation is going in our city, in our state, and in our country." The mayor recalled a recent blog post by the campaign manager of Team Rockville that described her as "a homemaker, as though that was an insult." The post angered many of her supporters. Newton said that in 2015, people should be celebrating individuals for "the choices they make, not putting labels on them."

In addition to a wide variety of leadership and public services roles she has held, Newton said her role as a parent gave her a set of skills that comes in handy in city politics. "There is no difference between a 2-year-old having a meltdown than dealing with a councilmember having a meltdown. With one, it's age-appropriate," she added to raucous laughter from the crowd.

She urged the crowd to focus in the next 6 weeks on "who will champion what is great about this city," and said having independent voices on the council would be an advantage. To that end, she invited the independent candidates for City Council - Beryl Feinberg, Rich Gottfried, David Hill, Brigitta Mullican and Patrick Schoof - to her event. 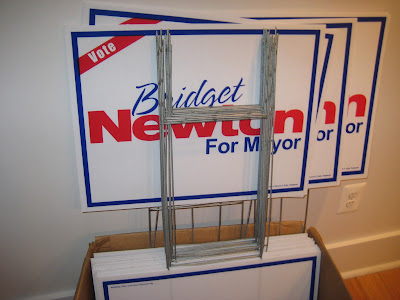