Banning smoking in outdoor areas in Rockville was discussed at last night's Mayor and Council meeting, but ultimately city leaders decided they want the final measure to be more uniform and comprehensive.

Councilmember Beryl Feinberg initiated the discussion by asking whether the measure should extend to off-leash dog parks, vaping or e-cigarettes, and asked for more detail on how much signage would cost for the city.

There was also a sense that the city should do more than just regulate smoking in and near parks and playgrounds, or just in Rockville Town Square.

When the topic of whether or not the ban could or would apply to RedGate Golf Course was raised, Assistant City Manager Jenny Kimball noted that Montgomery County has not banned smoking at its golf courses. Councilmember Tom Moore felt Rockville should take a bolder approach.

"Just the fact that Montgomery County hasn't banned smoking at golf courses does not speak to the health or safety of it," Moore argued. "This is a product that kills people." With a broader measure, Moore said, "Rockville could have a leadership role on this issue."

Councilmember Julie Palakovich Carr asked city staff if Rockville's contract with RedGate's management, Billy Casper Golf, would have to be renegotiated. Timothy Chesnutt, Director of Recreation and Parks, suggested such a negotiation would "have to wait until the next lease." Moore strongly disagreed with that, saying that municipal rules can and do change all the time, and that the city would be under no obligation to negotiate with Billy Casper before implementation of any smoking ban.

Mayor Bridget Donnell Newton said she also would favor a ban at RedGate, and a citywide ban on smoking in outdoor dining areas, rather than one just in part of the Town Center. Federal Realty, which developed and owns Rockville Town Square, objected to the proposed ban, saying that its restaurant and bar tenants would be at a disadvantage. Other restaurants a few blocks away would have been exempt, and there would be confusion over boundaries and enforcement, the developer argued.

Moore pointed to the experience of Bowie, where the municipality reported no negative impact on restaurants from a similar smoking ban. Palakovich Carr also said she would support a citywide smoking ban in outdoor dining areas.

While there is a clear majority and consensus among the Mayor and Council for taking a bolder approach, Newton suggested holding a public hearing on a final draft ordinance before taking a vote. "To be inclusive, we need to bring the public in," she said, as well as the businesses that would be affected by the change.

Staff was instructed to draft an ordinance that would ban smoking in outdoor dining areas citywide, in all city parks, and on the outdoor plaza at Rockville Town Square. Comments regarding enforcement should be solicited from the police chief, and the cost of signage should be tabulated, as well, before this is brought back for further discussion, the Mayor and Council agreed. 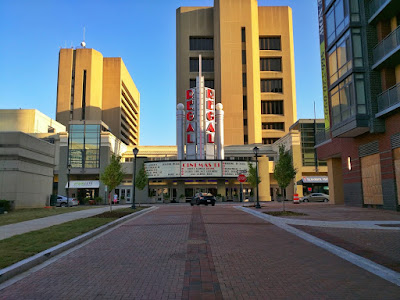