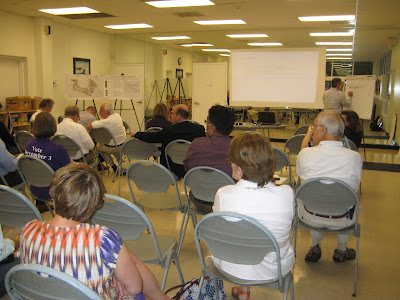 Business owners whose enterprises are located within the Southlawn industrial area, and in other currently-industrial parts of Rockville, are wary of the motives behind the Southlawn Industrial Area Feasibility Study now underway. Those concerns were expressed by some who attended the third public meeting on the study last night, at the Lincoln Park Community Center.

The study, which was supposed to have occurred years ago, was resurrected after a dust-up over a proposed self-storage facility next to Maryvale Elementary School in East Rockville. Residents protested, and the Mayor and Council ultimately voted to ban self-storage facilities within 250' of schools citywide.

That vote was "a very dangerous precedent," Rockville Chamber of Commerce President and CEO Michelle Day said at last night's meeting. The ban now has industrial businesses citywide spooked that they will be next, Day said. Along with real estate redevelopment pressures, the sense that industrial is on the way out was palpable among some business owners who attended the meeting.
"Where are the industrial businesses going to go, besides Frederick," the owner of an auto repair shop not far from Southlawn asked. Before moving to Rockville, he recalled, "I had an auto repair shop by White Flint. I paid $3000 rent" per month. The repair shop that took it over when he moved is now "paying $6000. Bullying somebody out because, 'I can make more money.' I know, because that's what they have done."

Susan Swift, Planning and Zoning Director for the City of Rockville, said "nothing's being proposed yet. These are facts and findings so we can move forward. There may be that nothing in these plans change; there may be a lot that changes. But we're not trying to pit one use against another. We really are trying to benefit everybody."

Residents said they didn't want the businesses to leave, either. One who was instrumental in getting the study revived said "I'm totally fine with [industrial businesses] existing. It's part of my community. I get my car repaired there."

Another resident noted that the residential neighborhoods in Lincoln Park and East Rockville were actually there before the Southlawn industrial area. But, she added, "I don't think the purpose of this is making change. It's so we can co-exist."

Brigitta Mullican, a candidate for Rockville City Council, said "it's important to indicate to business owners that this plan is not about pushing them out."

A landowner in Southlawn said there is far more demand for the warehouse space he currently offers to his tenants than for office space.

The fate of the industrial area will indeed partly be determined by the real estate market, which was a major focus of last night's study update.

Considering what other land uses might work in Southlawn did not turn up many promising alternatives. There is already too much vacant suburban office space for this to be an appealing location to build any more, Fox said. Retail is performing better around Southlawn, however, she said. The retail vacancy rate is 5.4% within a 3 mile radius of the study area, and 6.6% along the Gude Drive corridor. By comparison, the County's moribund office market has a 15% vacancy rate.

What kind of tenants might want to redevelop or repurpose industrial sites in Southlawn? Fox said gyms, recreational space, showrooms, retail warehouse outlet stores, biotech companies and business incubators all currently find such sites appealing. Not only do they need features such as high ceilings, space, and loading facilities, but the rents are far lower than in traditional commercial space.

VHB's Paul Mayer said the team has reached a few preliminary conclusions at this point, while stressing they won't make final conclusions and proposals before running them by the public for feedback:

Mayer said the next meeting will be in mid-to-late October, and that VHB will have completed a traffic study by then. It couldn't be done earlier, he explained, because school was not in session and that would have generated inaccurate traffic volumes.
Posted by Robert Dyer at 8:00 AM