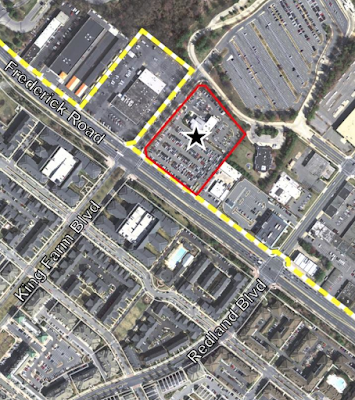 A plot of land in Derwood housing a CarMax dealership is on its way to being incorporated into the City of Rockville. The 4.032 acre site at 15931 Frederick Road is across an access road from the new Bainbridge Shady Grove apartment development, which was already annexed into Rockville from Montgomery County.

Known previously as Silverwood, the site would be the future home of a 425-unit apartment building, with 500 structured parking spaces. No retail or office components have been proposed, despite the potential Mixed-Use Transit District (MXTD) zoning the site would likely be granted, once incorporated into the city.

That lack of mixed uses did not sit well with some on the Rockville Planning Commission last night. Several commissioners expressed concern that, while the site is indeed proximate to the Shady Grove Metro station, it is otherwise isolated along a busy state highway. A lack of complimentary, walkable retail and restaurant development nearby would likely put residents into their cars to drive elsewhere. Commissioner Jack Leiderman said the isolated nature of the site "sort of robs the rationale for higher density." The site is two blocks from the King Farm Village Center shopping center, along King Farm Boulevard.

Ultimately, Commissioner David Hill made a motion to recommend the Mayor and Council accept the applicant's annexation plan, with a notation of concerns and possible conditions.

Hill suggested the city examine the fiscal impact of the project, investigate environmental concerns regarding the site (including monitoring wells), and consider pedestrian safety, by reserving part of the site's public use space for a pedestrian bridge.

He also recommended the Mayor and Council consider the following potential conditions, based upon last night's discussion by the commission:

1. Capping the building's height at 7 stories. A representative of the applicant said last night that such a cap would be acceptable.

2. Requiring retail space. The applicant says its advisors did not find a viable market for retail space in their review of the site, and that such a requirement would reduce the profit margin for the developer.

A third condition, proposed by Chair Don Hadley regarding the question of whether or not MXTD was the appropriate zoning for the site, was rejected as a friendly amendment by Hill.

Following discussion, the commission voted 4-3 to recommend the Mayor and Council accept the annexation plan. Hill, Tyner, and Commissioners Anne Goodman and Gail Sherman voted in favor; Hadley and Commissioners Leiderman and Charles Littlefield were opposed.

A public hearing on the annexation before the Mayor and Council is expected to take place on November 16, 2015.

Commissioners also voted 5-1-1 to give 300 N. Washington Street's 35% parking waiver request a deferral until the September 30 meeting, with Leiderman dissenting and Littlefield abstaining.
Posted by Robert Dyer at 8:00 AM