The Rockville Historic District Commission voted unanimously last night to grant Montgomery County permission to relocate the Confederate soldier memorial statue from the grounds of the historic Red Brick Courthouse. Commissioner Jessica Reynolds made the motion, and it was seconded by Commissioner Anita Neal Powell.

As part of her motion, Reynolds included a request that the new site of the statue be within the City of Rockville, and on public property where it can remain accessible to residents or historical walking tours and other educational opportunities.

"We would be fine with that language," Greg Ossont, representing the County's Department of General Services said prior to the vote. The request is not legally binding on the County.

Each commissioner made a brief statement, with all supporting moving the statue.

Commissioner Craig Maloney noted the statue is "an important piece of our history." Rockville was indeed a city divided during the Civil War, with a number of prominent residents supporting or even fighting on behalf of the Confederacy. Several notable Confederate figures passed through Rockville during the war.

But, Maloney said, "150 years have given us a different perspective." He recalled how the statue had been "defaced with the words, 'Black lives matter.' I would go a step further, and say black values matter. The value of a Confederate statue does not make the [Confederate] cause right or just."

Powell concurred. "I cannot support keeping the statue where it is," she said. "When I think of history, I think of that place across from the statue. I can tell you that until the murders took place in South Carolina, many people did not know the statue was there. It just doesn't fit into the history that I know," Powell concluded.

Reynolds said that in her personal view, "I would find it hard to support leaving the statue where it is, based on the information we have. However, the statue does have a lot of value in its own right." One positive result of moving the statue, she said, is that it would be better protected from vandalism.

Achtmeyer's assessment did bring a disagreement among several commissioners on whether or not the statue itself was indeed a contributing resource to the site, and whether it therefore deserved historic protection.

Maloney, while being quite clear that he did not favor keeping the statue there, said it nevertheless did have some standing within the context of its current location. [As an editorial note, I will also add that it is one of the few remaining vestiges of Rockville's historic downtown, most of which was demolished in the "urban renewal" of the 1960s and 70s.]

"It is not directly related to the Courthouse per se," Maloney conceded. But "it is typical of the statues" erected during that time period by Confederate heritage groups. "It is part of that legacy. We have one. It's in the context of the Courthouse, whether we like it or not. Does it deserve some protection as part of that historic site? I don't know. Maybe it does."

Perhaps sensing a potential legal argument that could be made, supporters of keeping the statue where it is attempted to share more information with commissioners, but were told they were out of order, as the public comment portion of the meeting had closed. One person made a motion from the floor to reopen it. Achtmeyer could find no support on the dais for doing so, and rejected the motion.

With the vote in its favor, the County now has one year to move the statue, and two six-month extensions. If it does not move it before that time, it will have to return to the commission again for permission.

Reynolds told statue supporters that this vote wasn't the final word. She urged them to contact the County Executive and County Council and make their opinions known to those who do have the final say on the statue's ultimate fate. 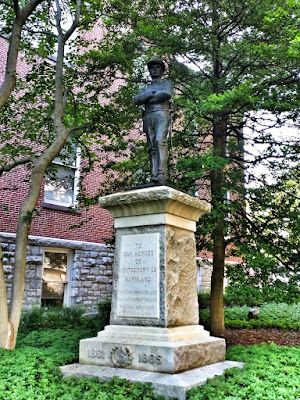