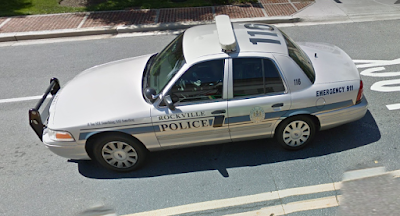 City of Rockville police assisted U.S. marshals and Montgomery County Sheriff's deputies in apprehending two men at the Montgomery County Circuit Courthouse this week, the Sheriff's Office reports. Deputies assigned to a courtroom for security in another case recognized two individuals wanted on federal charges of possession of a dangerous controlled substance, with intent to distribute.

The deputies alerted the U.S. Marshal Service and Rockville police. Personnel from both agencies responded to the scene, and the deputies then moved to successfully take both suspects into custody without incident, the Montgomery County Sheriff's Office says. The Rockville officers and marshals then transported the suspects to the federal court in Greenbelt.
Posted by Robert Dyer at 8:49 AM