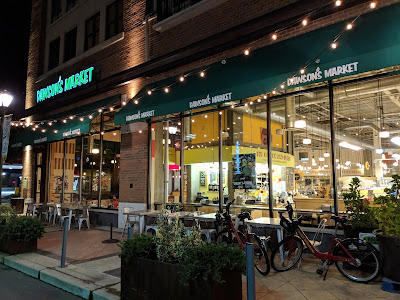 In a last-minute twist to a story that has shaken confidence in the future of Rockville Town Square, retail anchor Dawson's Market is having second thoughts about its closure announcement earlier this month. The market was on the way out at the end of the month until just days ago, when the owner announced a last-ditch effort to save the business.

A GoFundMe page has been set up to seek donations from the community to keep the market in business. In four days, the page has raised $16,571 of its $100,000 goal. However, at this rate, they will not reach that goal by October 27, the previously-announced closure date for the store. Perhaps the rate of donations will pick up as word spreads around town.

Owner Bart Yablonsky says he will not draw from the funds if he cannot reach a new lease agreement with landlord Federal Realty. Donors can get rewards such as a "I Saved Dawson's" t-shirt.
Posted by Robert Dyer at 8:00 AM