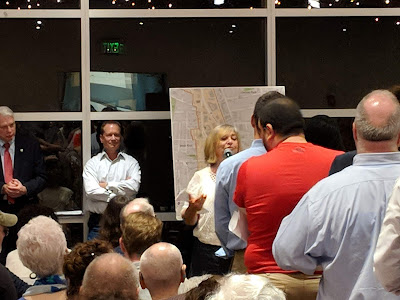 A public meeting on the future of Rockville Town Square exceeded the fire code-allowed capacity of the Buchanan Room at VisArts last night, forcing overflow attendees to listen from out in the hallway. Emotiional testimonies by business owners were only topped by bombshell announcements of additional business closures at the Square, and another Federal Realty property in Town Center.

Takeaways from the night include two clear problems - the widely-despised parking policies at RTS, and that "the rent is too damn high" at that property and nearby Courthouse Center. Last night we learned the latter is about to lose one of its most-popular and beloved tenants, when the owner of the Apollo Restaurant announced it will close at the end of this month, citing an inability to pay the high rent Federal Realty is asking for.
A member of the family that owns Samovar, a restaurant that has been closed for almost two months after water leaked in from the apartments above it, detailed her struggles with brokers and Federal Realty from the beginning. She said a property manager at RTS repeatedly stalled in giving her a key to their leased space, leaving owners and contractors unable to immediately access the restaurant as they began construction.

"I was crying, asking and begging them," she recalled. "Please, we need to start." Her architect charged them overtime as a result, she added. "He was standing there, next to the door," as she had no key or passcode to let him in. She said her father had opened and operated a successful restaurant in New York City with seating for one-thousand people, one in Denver, and another in Portland, Oregon, and assumed he would find similar success in Rockville.

But, "we cannot survive here," she said. "I was crying like hell...when we received the letters that they were going to evict us," she recounted. She segued into one of the banes of RTS tenants - parking. "Nobody wants to come here because of the parking," She noted correctly that two hours of validated parking is not enough for many people. Samovar hosts entertainment and events at which people may stay for more than two hours. She said Samovar wants to continue, but "I don't know," receiving a round of applause at the end of her remarks from the crowd.
A tearful owner of Pandora Seafood House and Bar said Federal Realty is evicting her restaurant later this month, after only one year (it was still operating last night). She said she was fooled about the full cost of renting the space by her agent, who she is now suing, and about what she would have to pay during the construction phase - which lasted quite a while, if you remember.

One retail tenant at the Square pointed to the larger business climate beyond Rockville as a cause of her trouble."I can no longer afford to do business in Montgomery County, or the state of Maryland," she said, announcing that she currently does not plan to renew her lease when it ends. "I'm telling you, Rockville, you are losing the heart of your city. Please do not make the mistake of letting all of your small, independent businesses go." 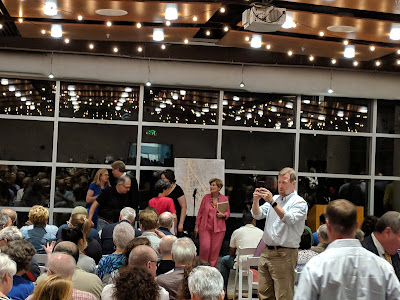 Former Rockville Mayor Larry Giammo, widely credited for his leadership in delivering the city's redeveloped Town Center, was clearly concerned about the fate of one of his legacy projects. Giammo honed in on the question of high rents. "What are the lease rates that Federal Realty is charging tenants here, and how do those compare" with competing developments, he asked to an eruption of applause. "It's obviously the key to understanding what's going on here."

Giammo said he was "heartbroken" to find out that Dawson's Market will be closing this month. "My family and I shop there a good three, four, five times a week. It's really a part of our lives now." He noted that the number of cars filling the reserved Dawson's Market spaces in the N. Washington Street surface lot at RTS often exceed the number of customers actually shopping inside the store. Despite repeated pleas from Dawson's to Federal Realty and parking contractor Colonial Parking, "neither has ever done anything" to assist the store. "So my question is, 'Why not?' If Federal Realty wanted it to succeed, why did they ignore such obvious issues?" Giammo concluded to applause. 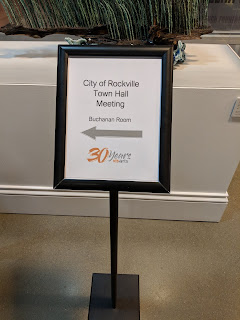 Another former elected official, City Councilman Tom Moore, called the decision to cut the planned height of the development's residential buildings in half a "fatal flaw." He said the reduced density deprived Town Center business owners of many more potential customers.

Resident Joe Jordan recommended that Federal Realty and the city conduct a form of exit interview with businesses that close, to determine if the cause was rent, their business model, or another issue.

Other suggestions made by attendees included more investment in arts and entertainment, turning Dawson's into a co-op market, adding a dog park, making a better connection to the Metro station, allowing up to 5 hours of free parking, and operating a shuttle bus. 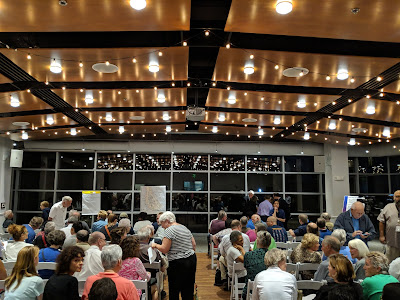 There was no shortage of complaints and concerns, but one element missing from the meeting was hearing from businesses that are doing well at Rockville Town Square. What are they doing right, what is drawing traffic to them, and how might those insights assist tenants who are struggling, or Federal Realty in better targeting local demographics? There was also frustration at the lack of feedback from City officials and Federal Realty representatives. One attendee said that he had expected more of a dialogue.

Officials said they wanted to allow the maximum time for the public and business owners to speak, rather than have a back-and-forth conversation. Mayor Bridget Donnell Newton, who called for the meeting, said the goal was to hear from all of the stakeholders involved to determine how the development can be succcessful. Rockville Chamber of Commerce CEO Marji Graf said all of those stakeholders do share one goal. "We all want the same thing - a thriving Rockville."
Posted by Robert Dyer at 8:00 AM